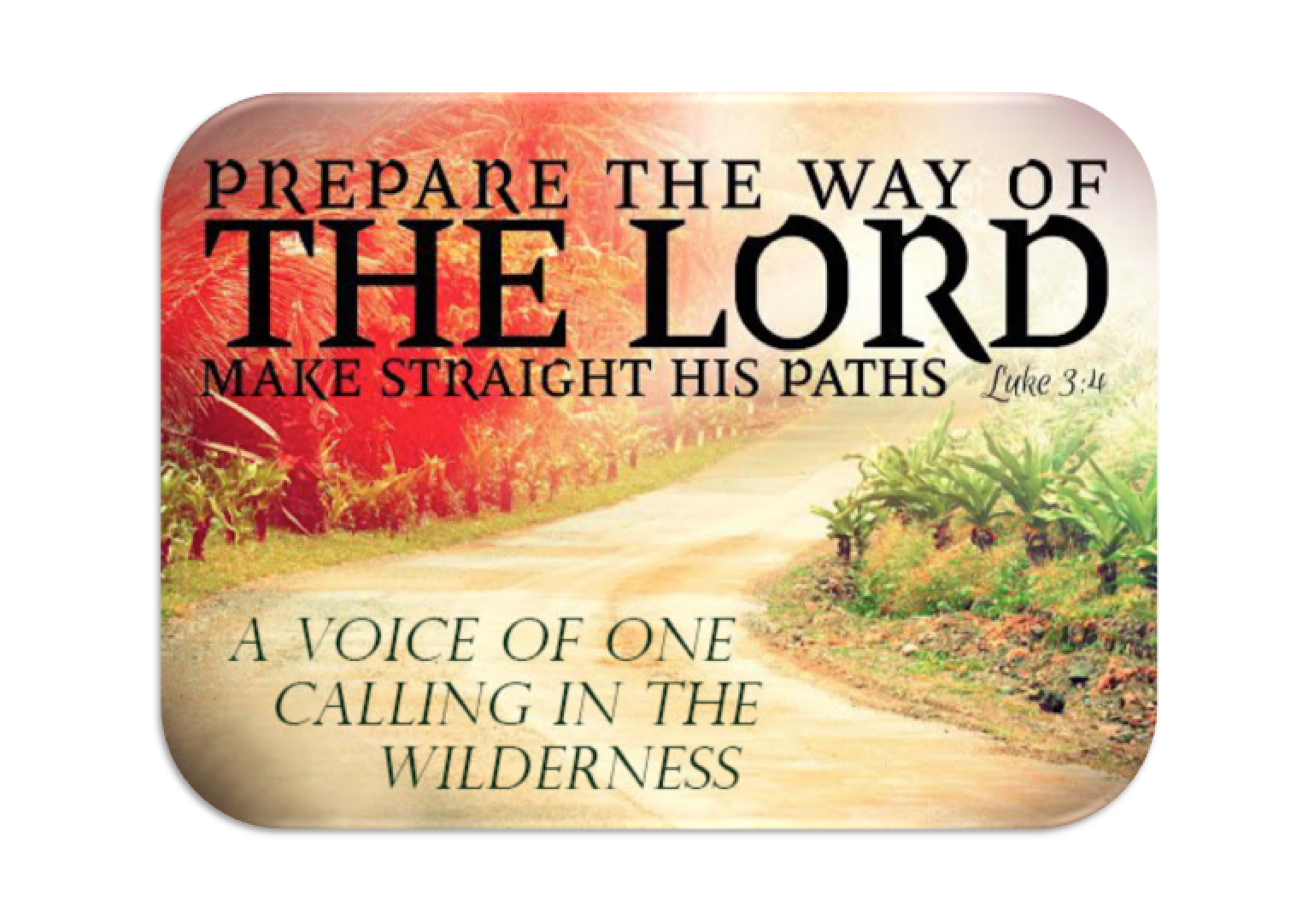 John the Baptist appeared, preaching in the desert of Judea
and saying, “Repent, for the kingdom of heaven is at hand!”
It was of him that the prophet Isaiah had spoken when he said:
A voice of one crying out in the desert,
Prepare the way of the Lord,
make straight his paths.
John wore clothing made of camel’s hair
and had a leather belt around his waist.
His food was locusts and wild honey.
At that time Jerusalem, all Judea,
and the whole region around the Jordan
were going out to him
and were being baptized by him in the Jordan River
as they acknowledged their sins.

When he saw many of the Pharisees and Sadducees
coming to his baptism, he said to them, “You brood of vipers!
Who warned you to flee from the coming wrath?
Produce good fruit as evidence of your repentance.
And do not presume to say to yourselves,
‘We have Abraham as our father.’
For I tell you,
God can raise up children to Abraham from these stones.
Even now the ax lies at the root of the trees.
Therefore every tree that does not bear good fruit
will be cut down and thrown into the fire.
I am baptizing you with water, for repentance,
but the one who is coming after me is mightier than I.
I am not worthy to carry his sandals.
He will baptize you with the Holy Spirit and fire.
His winnowing fan is in his hand.
He will clear his threshing floor
and gather his wheat into his barn,
but the chaff he will burn with unquenchable fire.”

What kind of Messiah did God promise to send to his people and how would he bring God’s kingdom to them? The prophet Isaiah foresaw the day when God would raise up a Messianic King long after King David’s throne had been overthrown and vacant for centuries. God promised that he would raise up a new king from the stump of Jesse, the father of King David (Isaiah 11:1). This messianic king would rule forever because the Spirit of God would rest upon him and remain with him (Isaiah 11:2).

Isaiah’s prophecy of the Messiah
Isaiah prophesied that the Messiah would be equipped with the gifts of the Spirit – with wisdom, understanding, counsel, might, knowledge, and fear of the Lord (Isaiah 11:2 – for an explanation of the gifts see this helpful article). This king would establish the kingdom of God, not by force of human will and military power, but by offering his life as the atoning sacrifice for the sin of the world. Through his death on the cross, Jesus, the true Messiah King, would defeat Satan, overcome death, and win pardon and reconciliation for sinners. God’s plan of redemption included not only the Jewish people but all the nations of the earth as well. Through his death and resurrection Jesus makes us citizens of heaven and friends of God. The Lord Jesus wants us to live in joyful hope and confident expectation that he will come again to fully establish his kingdom of righteousness and peace.

John the Baptist’s prophecy of the Messiah
Why did John the Baptist prophesy that the Messiah would come and “baptize with the Holy Spirit and with fire” (Matthew 3:11)? Fire in biblical times was often associated with God’s presence and with his action in the lives of his people. God sometimes manifested his presence by use of fire, such as the burning bush which was not consumed when God spoke to Moses (Exodus 3:2). The image of fire was also used to symbolize God’s glory (Ezekiel 1:4, 13), his protective presence (2 Kings 6:17), his holiness (Deuteronomy 4:24), righteous judgment (Zechariah 13:9), and his wrath against sin (Isaiah 66:15-16). Fire was also used as a sign of the Holy Spirit’s power and presence (Matthew 3:11). When the Holy Spirit was poured out on the day of Pentecost, tongues of fire appeared over the heads of the apostles and disciples of Jesus (Acts 2:3). The fire of the Holy Spirit purifies and cleanses us of sin, and it inspires a reverent fear of God and of his word in us. Do you want to be on fire for God and for the return of the Lord Jesus when he comes again in his glory?

John pointed others to the coming of Christ and his kingdom
John the Baptist’s life was fueled by one burning passion – to point others to Jesus Christ and to the coming of his kingdom. Who is John the Baptist and what is the significance of his message for our lives? Scripture tells us that John was filled with the Holy Spirit even from his mother’s womb(Luke 1:15, 41) by Christ himself, whom Mary had just conceived by the Holy Spirit. When Mary visited her cousin Elizabeth John lept in her womb as they were filled with the Holy Spirit (Luke 1:41). Like the prophets of the Old Testament, John devoted his entire life to prayer and the word of God. He was led by the Holy Spirit into the wilderness where he was tested and grew in the word of God. John’s clothing was reminiscent of the prophet Elijah (see Kings 1:8). The Holy Spirit prepared John for the mission entrusted to him as forerunner of the Messiah, Jesus Christ – the Word of God who became man for our salvation (John 1:1,14). John pointed to Jesus as the Lamb of God who would take away the sins of the world by offering his life on the cross as the atoning sacrifice for our sins and the sin of the world (John 1:29).

John broke the prophetic silence of the previous centuries when he began to speak the word of God to the people of Israel. His message was similar to the message of the Old Testament prophets who chided the people of God for their unfaithfulness and who tried to awaken true repentance in them. Among a people unconcerned with the things of God, it was his work to awaken their interest, unsettle them from their complacency, and arouse in them enough good will to recognize and receive Christ when he came. Are you eager to hear God’s word and to be changed by it through the power of the Holy Spirit?

A new era of God’s restoration begins
Jesus tells us that John the Baptist was more than a prophet (Luke 7:26). John was the voice of the Consoler who is coming (John 1:23; Isaiah 40:1-3). He completed the cycle of prophets begun by Elijah (Matthew 11:13-14). What the prophets had carefully searched for and angels longed to see, now came to completion as John made the way ready for the coming of the Messiah, God’s Anointed Son, the Lord Jesus Christ. With John the Baptist, the Holy Spirit begins the restoration to the human race of the “divine likeness”, prefiguring what would be achieved with and in the Lord Jesus.

John’s baptism was for repentance – turning away from sin and taking on a new way of life according to God’s word. Our baptism in Jesus Christ by water and the Spirit results in a new birth and entry into God’s kingdom as his beloved sons and daughters (John 3:5). The Lord Jesus gives us the fire of his Spirit so that we may radiate the joy and truth of the Gospel to a world in desperate need of God’s light and truth. His word has power to change and transform our lives that we may be lights pointing others to Christ. Like John the Baptist, we too are called to give testimony to the light and truth of Jesus Christ. Do you point others to Christ in the way you live, work, and speak?

Lord, let your light burn brightly in my heart that I may know the joy and freedom of your kingdom. Fill me with your Holy Spirit and empower me to witness the truth of your Gospel and to point others to Jesus Christ.