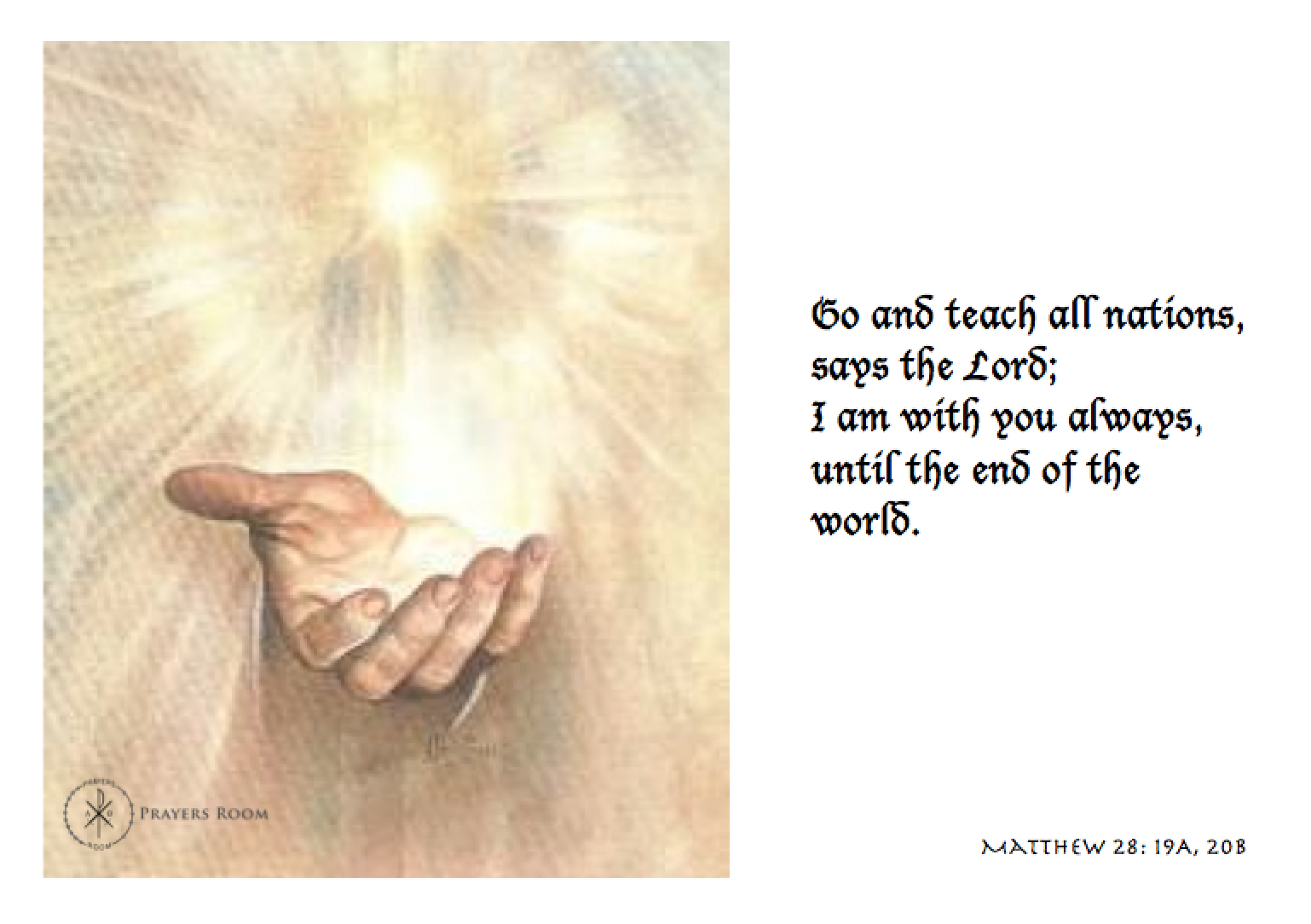 Today’s Note: Holy Saturday – At the Easter Vigil in the Holy Night of Easter

After the sabbath, as the first day of the week was dawning,
Mary Magdalene and the other Mary came to see the tomb.
And behold, there was a great earthquake;
for an angel of the Lord descended from heaven,
approached, rolled back the stone, and sat upon it.
His appearance was like lightning
and his clothing was white as snow.
The guards were shaken with fear of him
and became like dead men.
Then the angel said to the women in reply,
“Do not be afraid!
I know that you are seeking Jesus the crucified.
He is not here, for he has been raised just as he said.
Come and see the place where he lay.
Then go quickly and tell his disciples,
‘He has been raised from the dead,
and he is going before you to Galilee;
there you will see him.’
Behold, I have told you.”
Then they went away quickly from the tomb,
fearful yet overjoyed,
and ran to announce this to his disciples.
And behold, Jesus met them on their way and greeted them.
They approached, embraced his feet, and did him homage.
Then Jesus said to them, “Do not be afraid.
Go tell my brothers to go to Galilee,
and there they will see me.”

They laid him in a rock-hewn tomb

Jesus not only died for our sins (1 Corinthians 15:3); he also, by the grace of God, tasted death for every one (Hebrews 2:9). It was a real death that put an end to his earthly human existence. Jesus died in mid afternoon and the Sabbath began at 6:00 pm. Since the Jewish law permitted no work on the Sabbath, the body had to be buried quickly. Someone brave enough would have to get permission from the Roman authorities to take the body and bury it. The bodies of executed criminals were usually left unburied as carion for the vultures and dogs. Jesus was spared this indignity through the gracious intervention of Joseph of Arimethea.

Who was this admirer and secret disciple of Jesus? Luke tells us that Joseph was a member of the Sanhedrin, the supreme Jewish council that condemned Jesus. We are told that he did not agree with their verdict. He was either absent from their meeting or silent when they tried Jesus. What kind of man was Joseph? Luke tells us that he was “good and righteous” and “looking for the kingdom of God”. Although he did not stand up for Jesus at his trial, he nonetheless, sought to honor him in his death by giving him a proper burial. This was to fulfill what the prophet Isaiah had foretold: “He was cut off out of the land of the living ..and they made his grave with the wicked and with a rich man in his death, although he had done no violence, and there was no deceit in his mouth” (Isaiah 53:8-9).

In the Book of Revelation, the Lord Jesus speaks: “Fear not, I am the first and the last, and the living one: I died, and behold I am alive for evermore, and I have the keys of Death and Hades” (Revelation 1:17-18). No tomb in the world could contain the Lord Jesus for long. His death on the cross purchased our redemption and his triumph over the grave on Easter morning defeated death. What preserved the Lord Jesus from corruption? He was kept from decay and he rose from the dead by divine power. “My flesh will dwell in hope. For you will not let your Holy One see corruption” (Psalm 16:9-10). The mystery of Christ’s lying in the tomb on the sabbath reveals the great sabbath rest of God after the fulfillment of our salvation which brings peace to the whole world (Colossians 1:18-20). Is your hope in this life only, or is it well founded in the resurrection of Christ and his promise that those who believe in him will live forever?

“Lord Jesus, you died that I might live forever in your kingdom of peace and righteousness. Strengthen my faith that I may I know the power of your resurrection and live in the hope of seeing you face to face for ever.”