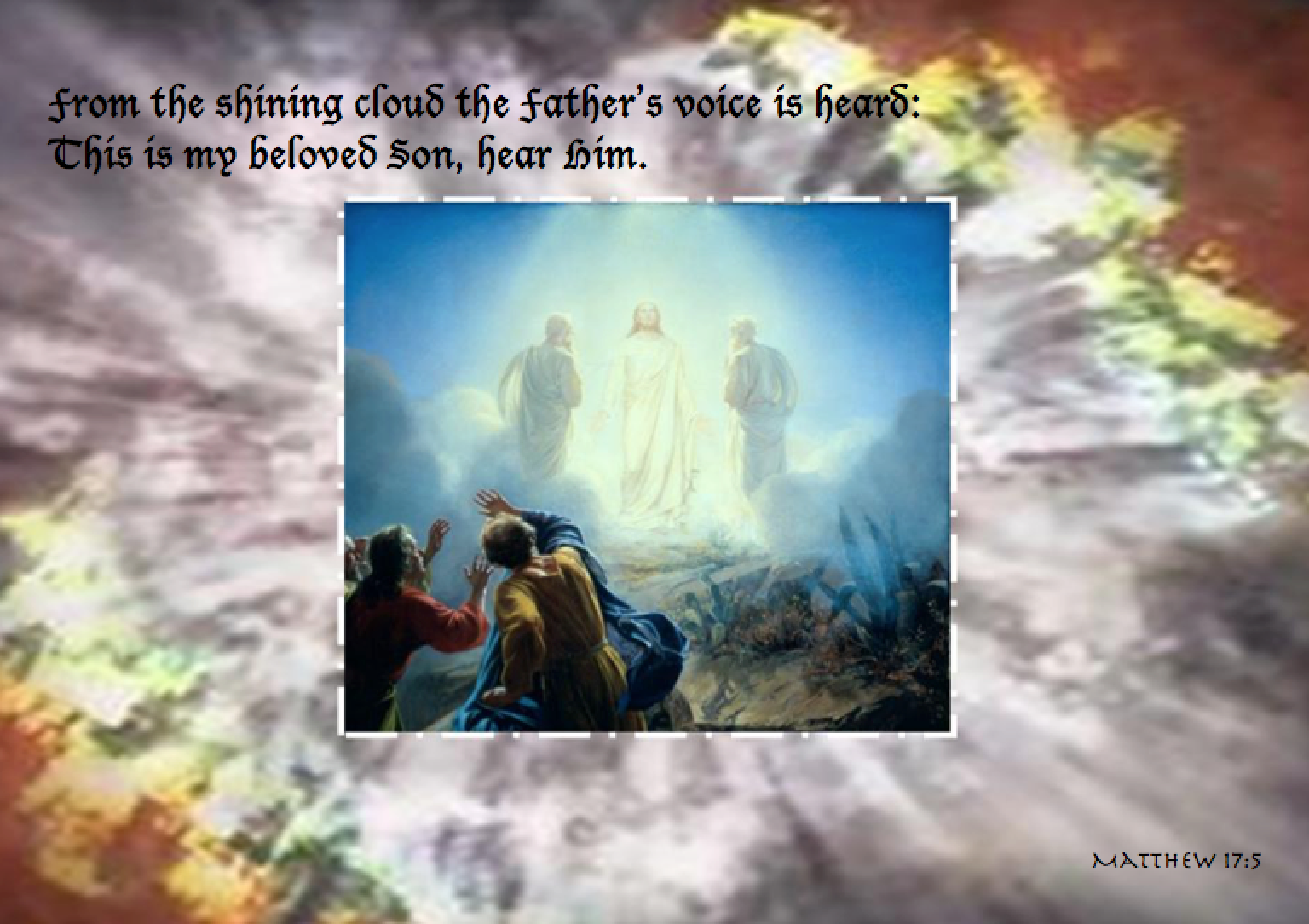 Jesus took Peter, James, and John his brother,
and led them up a high mountain by themselves.
And he was transfigured before them;
his face shone like the sun
and his clothes became white as light.
And behold, Moses and Elijah appeared to them,
conversing with him.
Then Peter said to Jesus in reply,
“Lord, it is good that we are here.
If you wish, I will make three tents here,
one for you, one for Moses, and one for Elijah.”
While he was still speaking, behold,
a bright cloud cast a shadow over them,
then from the cloud came a voice that said,
“This is my beloved Son, with whom I am well pleased;
listen to him.”
When the disciples heard this, they fell prostrate
and were very much afraid.
But Jesus came and touched them, saying,
“Rise, and do not be afraid.”
And when the disciples raised their eyes,
they saw no one else but Jesus alone.

As they were coming down from the mountain,
Jesus charged them,
“Do not tell the vision to anyone
until the Son of Man has been raised from the dead.”

Jesus’ Transfiguration was one of the most magnificent displays of God’s glory the world has seen. The purpose of the Transfiguration was to give his apostles, and all of us, a deeper understanding of who he is. So let’s see what we can learn from it.

Clearly, this was a dramatic revelation for Peter, James, and John. They never forgot what happened that day. Decades after it happened, John wrote, “We saw his glory” (John 1:14). Peter said, “We had been eyewitnesses of his majesty . . . when that unique declaration came to him from the majestic glory” (2 Peter 1:16, 17). The Transfiguration showed them that the kingdom of God that Jesus had been preaching would be characterized by glory. But it also encouraged them and strengthened them for the ordeal of the cross that lay before them. For as they learned at Calvary, the glory of God comes not only through displays of magnificence, but also through self-giving love—a love that embraces even death.

Let these lessons about glory and self-giving love sink into your heart. As you dwell on the glory of Jesus’ Transfiguration, see that it is a glory that comes because of his cross. Then, tell him that you want to be changed into his glorious image. Ask him to take your every act of love and fill it with his presence. It really is possible for us to live “for the praise of his glory” (Ephesians 1:12).

“Jesus, open my eyes to the glory that you displayed before Peter, James, and John. Let that glory reign in my heart.”