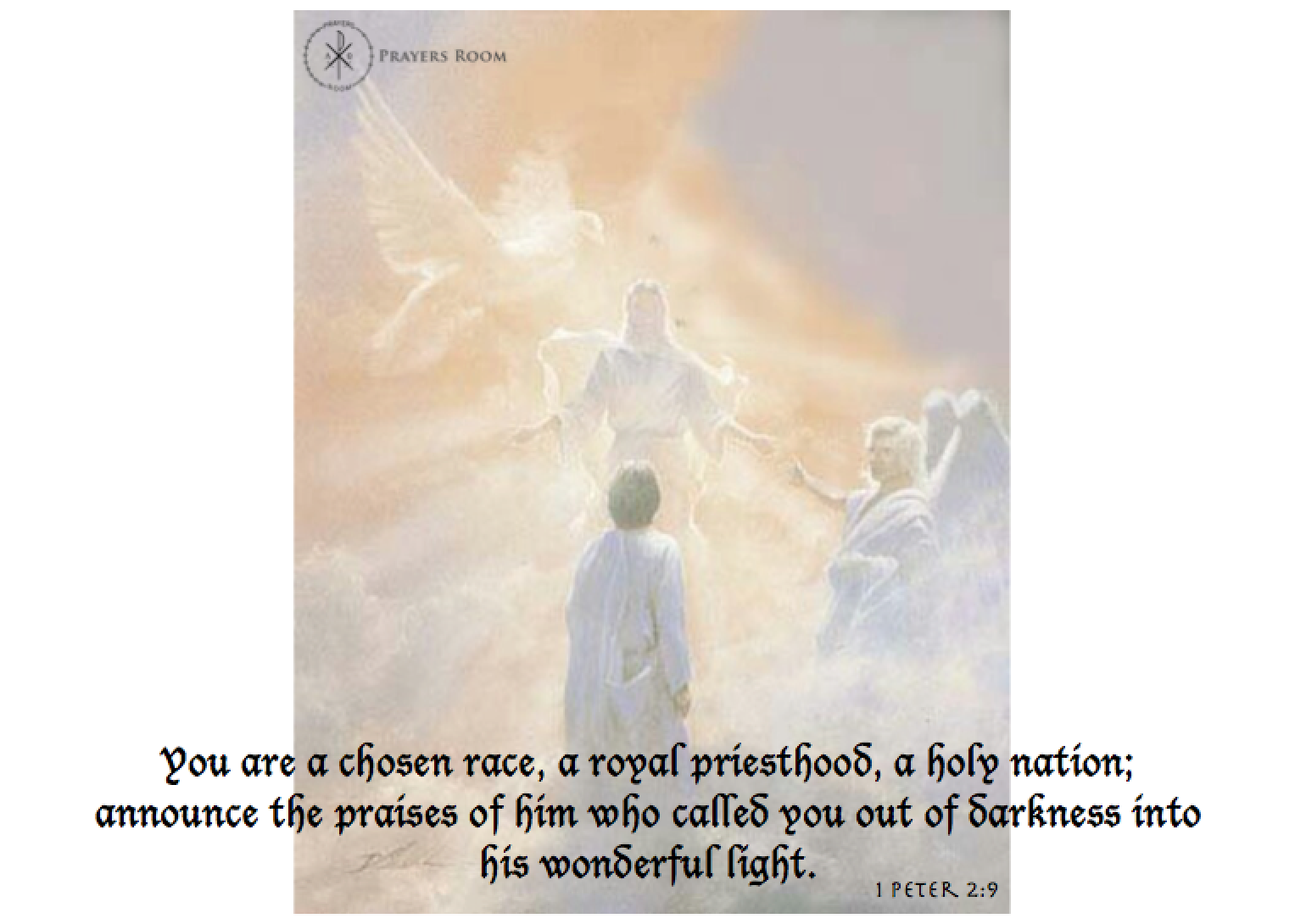 Today’s Note: The Nativity of the Lord (Christmas)
Mass during the Day

But to those who did accept him
he gave power to become children of God,
to those who believe in his name,
who were born not by natural generation
nor by human choice nor by a man’s decision
but of God.
And the Word became flesh
and made his dwelling among us,
and we saw his glory,
the glory as of the Father’s only Son,
full of grace and truth.

Why does John the Evangelist begin his Gospel account with a description of the Word of God and the creation of the universe and humankind? How might the beginning of John’s Gospel be linked with the beginning of the first book of Genesis (John 1:1-3 and Genesis 1:1-3)? The “word of God” was a common expression among the Jews. God’s word in the Old Testament is an active, creative, and dynamic word. “By the word of the Lord the heavens were made” (Psalm 33:6). “He sends forth his commands to the earth; his word runs swiftly” (Psalm 147:15). “Is not my word like fire, says the Lord, and like a hammer which breaks the rock in pieces” (Jeremiah 23:29)? The writer of the Book of Wisdom addresses God as the one who “made all things by your word” (Wisdom 9:1).

The eternal Word leaped down from heaven
God’s word is also equated with his wisdom. “The Lord by wisdom founded the earth” (Proverbs 3:19).The Book of Wisdom describes “wisdom” as God’s eternal, creative, and illuminating power. Both “word” and “wisdom” are seen as one and the same. “For while gentle silence enveloped all things, and night in its swift course was now half gone, your all-powerful word leaped from heaven, from the royal throne, into the midst of the land that was doomed, a stern warrior carrying the sharp sword of your authentic command” (Book of Wisdom 18:14-16).

Truly man and truly God
John describes Jesus as God’s creative, life-giving and light-giving word that has come to earth in human form. “God so loved the world that he gave his only Son, that whoever believes in him should not perish but have eternal life” (John 3:16). Jesus is the wisdom and power of God which created the world and sustains it who assumed a human nature in order to accomplish our salvation in it. Jesus became truly man while remaining truly God. “What he was, he remained, and what he was not he assumed” (from an early church antiphon for morning prayer). Jesus Christ is truly the Son of God who, without ceasing to be God and Lord, became a man and our brother. From the time of the Apostles the Christian faith has insisted on the incarnation of God’s Son “who has come in the flesh” (1 John 4:2).

Gregory of Nyssa, one of the great early church fathers (330-395 AD) wrote: Sick, our nature demanded to be healed; fallen, to be raised up; dead, to rise again. We had lost the possession of the good; it was necessary for it to be given back to us. Closed in darkness, it was necessary to bring us the light; captives, we awaited a Savior; prisoners, help; slaves, a liberator. Are these things minor or insignificant? Did they not move God to descend to human nature and visit it, since humanity was in so miserable and unhappy a state?

Christians never cease proclaiming anew the wonder of the Incarnation. The Son of God assumed a human nature in order to accomplish our salvation in it. The Son of God …worked with human hands; he thought with a human mind. He acted with a human will, and with a human heart he loved. Born of the Virgin Mary, he has truly been made one of us, like to us in all things except sin (Gaudium et Spes).

We become partakers of Christ’s divine nature
If we are going to behold the glory of God we will do it through Jesus Christ. Jesus became the partaker of our humanity so we could be partakers of his divinity (2 Peter 1:4). God’s purpose for us, even from the beginning of his creation, is that we would be fully united with Him. When Jesus comes God is made known as the God and Father of our Lord Jesus Christ. By our being united in Jesus, God becomes our Father and we become his sons and daughters. Do you thank the Father for sending his only begotten Son to redeem you and to share with you his glory?

Almighty God and Father of light, your eternal Word leaped down from heaven in the silent watches of the night. Open our hearts to receive his life and increase our vision with the rising of dawn, that our lives may be filled with his glory and his peace.