Memorial of Our Lady of Sorrows – History 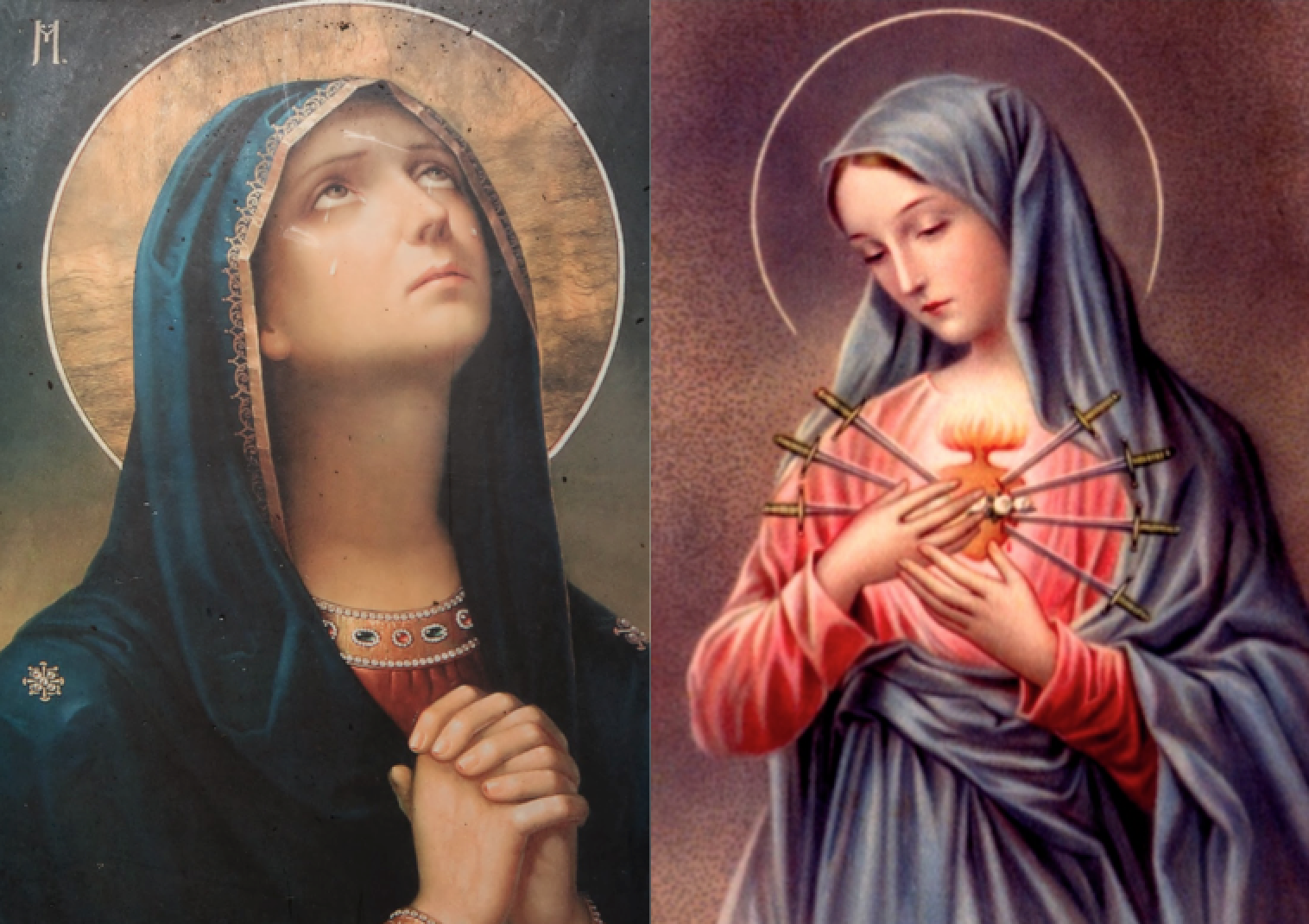 Devotion to the Seven Sorrows of Our Lady has its roots in Sacred Scripture and in Christian piety, which always associates the Blessed Mother with her suffering Son.

The title “Our Lady of Sorrows“, given to our Blessed Mother focuses on Mary’s intense suffering during the passion and death of Christ.

Traditionally, this suffering was not limited to the passion and death event; rather, it comprised the seven dolors or seven sorrows of Mary, which were foretold by the Priest Simeon who proclaimed to Mary, This child [Jesus] is destined to be the downfall and the rise of many in Israel, a sign that will be opposed and you yourself shall be pierced with a sword so that the thoughts of many hearts may be laid bare (Luke 2:34-35).

“The Seven Dolors,” the title by which it was celebrated in the 17th century, referred to the seven swords that pierced the Heart of Mary. These seven sorrows of our Blessed Mother included:
1. the prophecy of Simeon;
2. the flight of the Holy Family into Egypt;
3. the loss and finding of the child Jesus in the Temple;
4. Mary’s meeting of Jesus on His way to Calvary;
5. Mary’s standing at the foot of the cross when our Lord was crucified;
6. her holding of Jesus when He was taken down from the cross; and then
7. our Lord’s burial.

In all, the prophecy of Simeon that a sword would pierce our Blessed Mother’s heart was fulfilled in these events. For this reason, Mary is sometimes depicted with her heart exposed and with seven swords piercing it. More importantly, each new suffering was received with the courage, love, and trust that echoed her fiat, let it be done unto me according to Thy word, first uttered at the Annunciation.

This Feast of Our Lady of Sorrows grew in popularity in the 12th century. It was especially promoted by the Cistercians and the Servites in order to intensify devotion to Our Lady’s Sorrows, so much so that in the 14th and 15th centuries it was widely celebrated throughout the Catholic Church.

Interestingly, in 1482, the feast was officially placed in the Roman Missal under the title of “Our Lady of Compassion“, highlighting the great love our Blessed Mother displayed in suffering with her Son. The word compassion derives from the Latin roots cum and patior which means to suffer with. Our Blessed Mother’s sorrow exceeded anyone else’s since she was the mother of Jesus, who was not only her Son but also her Lord and Savior; she truly suffered with her Son. In 1727, Pope Benedict XIII placed the Feast of Our Lady of Compassion in the Roman Calendar on Friday before Palm Sunday. This feast was suppressed with the revision of the calendar published in the Roman Missal of 1969.

The key image here is our Blessed Mother standing faithfully at the foot of the cross with her dying Son: the Gospel of St. John recorded, Seeing His mother there with the disciple whom He loved, Jesus said to His mother, ‘Woman, there is your son.’ In turn He said to the disciple, ‘There is your mother.’ (John 19:26-27).

The Second Vatican Council in its Dogmatic Constitution on the Church wrote, A…She stood in keeping with the divine plan, suffering grievously with her only-begotten Son. There she united herself, with a maternal heart, to His sacrifice, and lovingly consented to the immolation of this Victim which she herself had brought forth (#58).

St. Bernard (d. 1153) wrote, Truly, O Blessed Mother, a sword has pierced your heart…. He died in body through a love greater than anyone had known. She died in spirit through a love unlike any other since His (De duodecim praerogatativs BVM).

Focusing on the compassion of our Blessed Mother, our Holy Father, Pope John Paul II, reminded the faithful, Mary Most Holy goes on being the loving consoler of those touched by the many physical and moral sorrows which afflict and torment humanity. She knows our sorrows and our pains, because she too suffered, from Bethlehem to Calvary. ‘And they soul too a sword shall pierce.’ Mary is our Spiritual Mother, and the mother always understands her children and consoles them in their troubles. Then, she has that specific mission to love us, received from Jesus on the Cross, to love us only and always, so as to save us! Mary consoles us above all by pointing out the Crucified One and Paradise to us! (1980).

Therefore, as we honor our Blessed Mother, our Lady of Sorrows, we honor her as the faithful disciple and exemplar of faith. Let us pray as we do in the opening prayer of the Mass for this feast day: “Father, as your Son was raised on the cross, His Mother Mary stood by Him, sharing His sufferings. May your Church be united with Christ in His suffering and death and so come to share in His rising to new life.” Looking to the example of Mary, may we too unite our sufferings to our Lord, facing them with courage, love, and trust.

The feast is like an octave for the birthday of Our Lady on September 8th. — Excerpted from Our Lady of Sorrows by Fr. Paul Haffner (Inside the Vatican, September 2004).