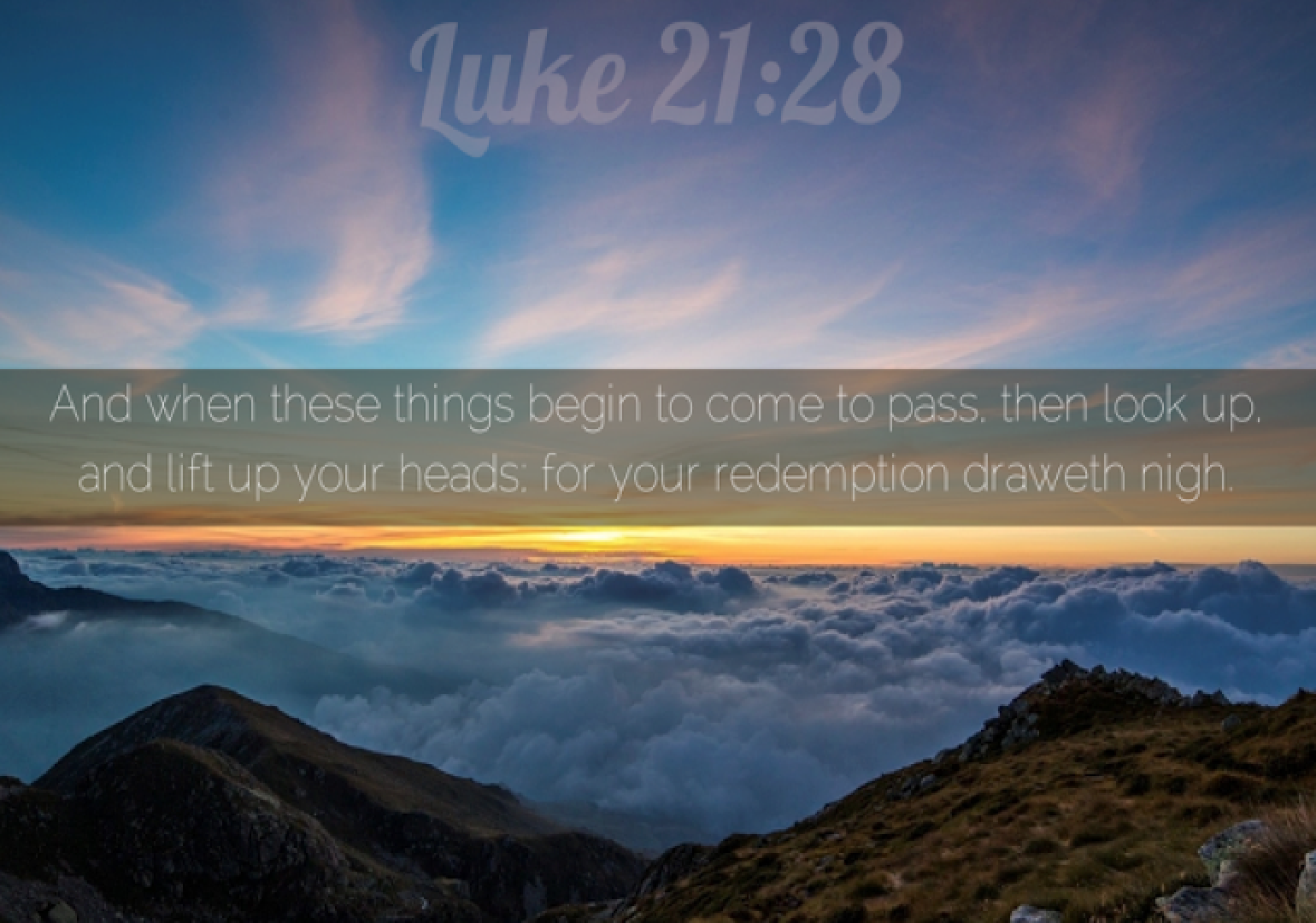 Today’s Note: Thursday of the Thirty-Fourth Week in Ordinary Time

Jesus said to his disciples:
“When you see Jerusalem surrounded by armies,
know that its desolation is at hand.
Then those in Judea must flee to the mountains.
Let those within the city escape from it,
and let those in the countryside not enter the city,
for these days are the time of punishment
when all the Scriptures are fulfilled.
Woe to pregnant women and nursing mothers in those days,
for a terrible calamity will come upon the earth
and a wrathful judgment upon this people.
They will fall by the edge of the sword
and be taken as captives to all the Gentiles;
and Jerusalem will be trampled underfoot by the Gentiles
until the times of the Gentiles are fulfilled.

“There will be signs in the sun, the moon, and the stars,
and on earth nations will be in dismay,
perplexed by the roaring of the sea and the waves.
People will die of fright
in anticipation of what is coming upon the world,
for the powers of the heavens will be shaken.
And then they will see the Son of Man
coming in a cloud with power and great glory.
But when these signs begin to happen,
stand erect and raise your heads
because your redemption is at hand.”

Do you believe that the world as we know it is going to end just as Jesus foretold? Jesus’ prophetic description of the destruction of the holy city Jerusalem, the destruction of the world, and the day of final judgment, was not new to the people of Israel. The prophets had foretold these events many centuries before. Behold the day of the Lord comes, cruel, with wrath and fierce anger to make the earth a desolation and to destroy its sinners from it (Isaiah 13:9-13; see also Joel 2:1-2; Amos 5:18-20; Zephaniah 1:14-18).

Indifference and rejection of the Gospel lead to destruction
Jesus warns of the imminent destruction of Jerusalem as a consequence of the rejection of the Gospel. According to the historian Josephus, over a million inhabitants died when the Romans destroyed Jerusalem with its temple in 70 A.D. Jerusalem’s vengeance resulted from her indifference to the visitation of God in the person of the Lord Jesus Christ (Luke 19:44).

Jesus also speaks about the judgment at the end of the world. Only spiritual blindness can keep us from recognizing the obvious signs of approaching disaster which awaits the day of judgment for those who refuse to heed God’s word of grace and salvation. Jesus was completely honest. He told his disciples what it would cost to follow him. And he promised that he would never leave them alone, even in their time of tribulation. The saints and martyrs who underwent torment and death made their prisons a temple of praise and their scaffolds a throne to the glory of God. They knew the saving presence of Jesus Christ with them in all circumstances. Jesus offers us safety in the face of earth’s threats. Not a hair of your head will perish (Luke 21:18). The disciple who walks with Christ may lose their body but not their soul.

We hope for what is to come – full redemption of our bodies and a new heavens and earth
The greatest gift which no one can take from us and which we can be most thankful for is our redemption through the precious blood of Jesus, which was shed on the cross for our sins, and our adoption through Christ as children of God our heavenly Father. Jesus Christ has redeemed us from slavery to sin, from fear of death, and from final destruction. We can be eternally thankful because our hope is anchored in heaven and in the promise that Jesus will return to fully establish his reign of peace and righteousness. The Lord Jesus will raise our lowly bodies to be like his glorious body which is no longer subject to illness, death and corruption.

Jesus speaks of his second coming as a known fact, a for certain event which we can confidently expect to take place in the Lord’s time of choosing. This coming will be marked by signs that all will recognize – signs which will strike terror and grief in those who are unprepared and wonder and joy in those who are ready to meet the Lord. When the Lord Jesus returns he will fully establish his kingdom of justice and righteousness and he will vindicate all who have been faithful to him. His judgment is a sign of hope for those who have placed their trust in him. Do you hope in God and in the promise of Christ to return again to create new heavens and a new earth (Isaiah 65:17 and Revelation 21:1)?

Lord Jesus, fill me with gratitude for the gift of redemption and increase my hope and longing for your return again in glory. May that day bring joy to my heart rather than sorrow. Help me to serve you faithfully and to make the best use of my time now in the light of your coming again.