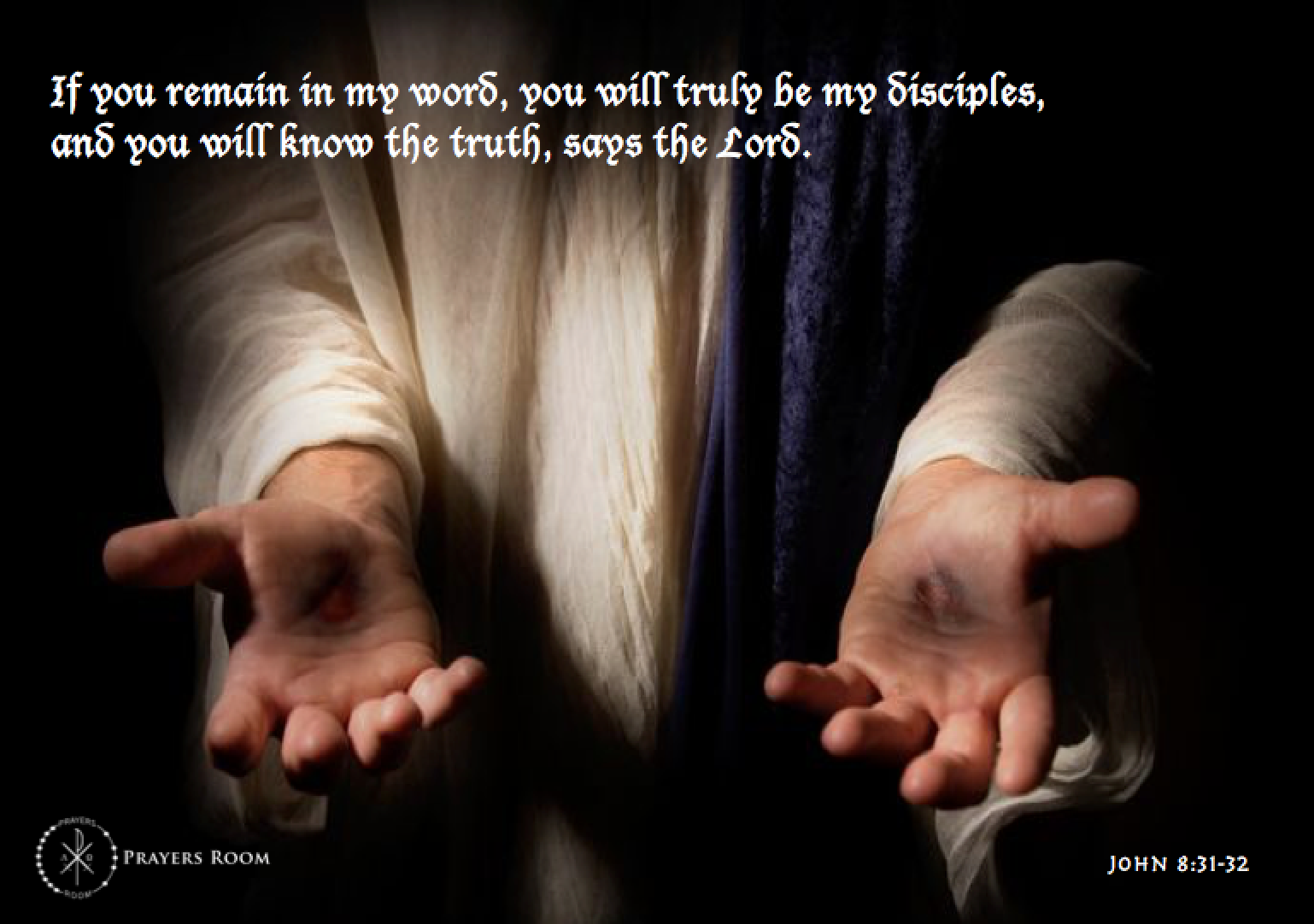 Today’s Note: Memorial of Our Lady of the Rosary

When Jesus had driven out a demon, some of the crowd said:
“By the power of Beelzebul, the prince of demons,
he drives out demons.”
Others, to test him, asked him for a sign from heaven.
But he knew their thoughts and said to them,
“Every kingdom divided against itself will be laid waste
and house will fall against house.
And if Satan is divided against himself, how will his kingdom stand?
For you say that it is by Beelzebul that I drive out demons.
If I, then, drive out demons by Beelzebul,
by whom do your own people drive them out?
Therefore they will be your judges.
But if it is by the finger of God that I drive out demons,
then the Kingdom of God has come upon you.
When a strong man fully armed guards his palace,
his possessions are safe.
But when one stronger than he attacks and overcomes him,
he takes away the armor on which he relied
and distributes the spoils.
Whoever is not with me is against me,
and whoever does not gather with me scatters.

“When an unclean spirit goes out of someone,
it roams through arid regions searching for rest
but, finding none, it says,
‘I shall return to my home from which I came.’
But upon returning, it finds it swept clean and put in order.
Then it goes and brings back seven other spirits
more wicked than itself who move in and dwell there,
and the last condition of that man is worse than the first.”

When danger lurks, what kind of protection do you seek? Jesus came to free us from the greatest danger of all – the corrupting force of evil which destroys us from within and makes us slaves to sin and Satan (John 8:34). Evil is not an impersonal force that just happens. It has a name and a face and it seeks to master every heart and soul on the face of the earth (1 Peter 5:8-9). Scripture identifies the Evil One by many names, ‘Satan’, ‘Beelzebul – the ‘prince of demons’, the ‘Devil’, the ‘Deceiver’, the ‘Father of Lies’, and ‘Lucifier’, the fallen angel who broke rank with God and established his own army and kingdom in opposition to God.

Jesus has power to cast out the Deceiver and set us free
Jesus declared that he came to overthrow the power of Satan and his kingdom (John 12:31). Jesus’ numerous exorcisms brought freedom to many who were troubled and oppressed by the work of evil spirits. Jesus himself encountered personal opposition and battle with Satan when he was put to the test in the wilderness just before his public ministry (Matthew 4:1; Luke 4:1). He overcame the Evil One through his obedience to the will of his Father.

Some of the Jewish leaders reacted vehemently to Jesus’ healings and exorcisms and they opposed him with malicious slander. How could Jesus get the power and authority to release individuals from Satan’s influence and control? They assumed that he had to be in league with Satan. They attributed his power to Satan rather than to God. Jesus answers their charge with two arguments. There were many exorcists in Palestine in Jesus’ time. So Jesus retorted by saying that they also incriminate their own kin who cast out demons. If they condemn Jesus they also condemn themselves.

Whose kingdom do you follow and serve?
In his second argument Jesus asserts that no kingdom divided against itself can survive for long. We have witnessed enough civil wars in our own time to prove the destructive force at work here for the annihilation of whole peoples and their land. If Satan lends his power against his own forces then he is finished.

Kingdoms are established by the fidelity of subjects and the obedience of those under the royal scepter. Houses are established when those who belong to them in no way whatsoever thwart one another but, on the contrary, agree in will and deed. I suppose it would establish the kingdom too of Beelzebub, had he determined to abstain from everything contrary to himself. How then does Satan cast out Satan? It follows then that devils do not depart from people on their own accord but retire unwillingly. “Satan,” he says, “does not fight with himself.” He does not rebuke his own servants. He does not permit himself to injure his own armor bearers. On the contrary, he helps his kingdom. “It remains for you to understand that I crush Satan by divine power.” [Commentary on Luke, Homily 80]

How can a strong person be defeated except by someone who is stronger? Jesus asserted his power and authority to cast out demons as a clear demonstration of the reign of God. Jesus’ reference to the ‘finger of God’ points back to Moses’ confrontation with Pharoah and his magicians who represented Satan and the kingdom of darkness (see Exodus 8:19). Jesus claims to be carrying on the tradition of Moses whose miracles freed the Israelites from bondage by thefinger of God. God’s power is clearly at work in the exorcisms which Jesus performed and they give evidence that God’s kingdom has come.

God and his Word is the source of our protection and security
What is the point of Jesus’ grim story about a vacant house being occupied by an evil force? It is not enough to banish evil thoughts and habits from our lives. We must also fill the void with God who is the source of all that is good, wholesome, true, and life-giving for us. Augustine of Hippo said that our lives have a God-shaped void which only God can fill. If we attempt to leave it vacant or to fill it with something else which is not of God, we will end up being in a worse state in the end.

What do you fill the void in your life with? The Lord Jesus wants to fill our minds and hearts with the power of his life-giving word and healing love. Jesus makes it very clear that there are no neutral parties in this world. We are either for the Lord Jesus or against him, for the kingdom of God or against it. We cannot serve two kingdoms opposed to each another. There are ultimately only two universal kingdoms which stand in opposition to one another – the kingdom of God – his kingdom of light and truth – and the kingdom of darkness – which is opposed to God’s truth and justice and which is dominated by Satan’s lies and deception. If we disobey God’s word, we open to door to the power of sin and the deception of Satan in our personal lives.

Is Jesus the Lord of your mind, heart, and home?
If we want to live in true freedom, then our “house” (the inner core of our true being) must be occupied by Jesus where he is enthroned as Lord and Savior. The Lord assures us of his protection from spiritual harm and he gives us the help and strength we need to resist the devil and his lies (James 4:7). The Scriptures remind us that God is our refuge and his angels stand guard over us:

“Because you have made the Lord your refuge, the Most High your habitation, no evil shall befall you, no scourge come near your tent. For he will give his angels charge of you to guard you in all your ways”(Psalm 91:9-11).

Do you know the peace and security of a life submitted to God and his word?

Lord Jesus, be the ruler of my heart and the master of my home. May there be nothing in my life that is not under your lordship.