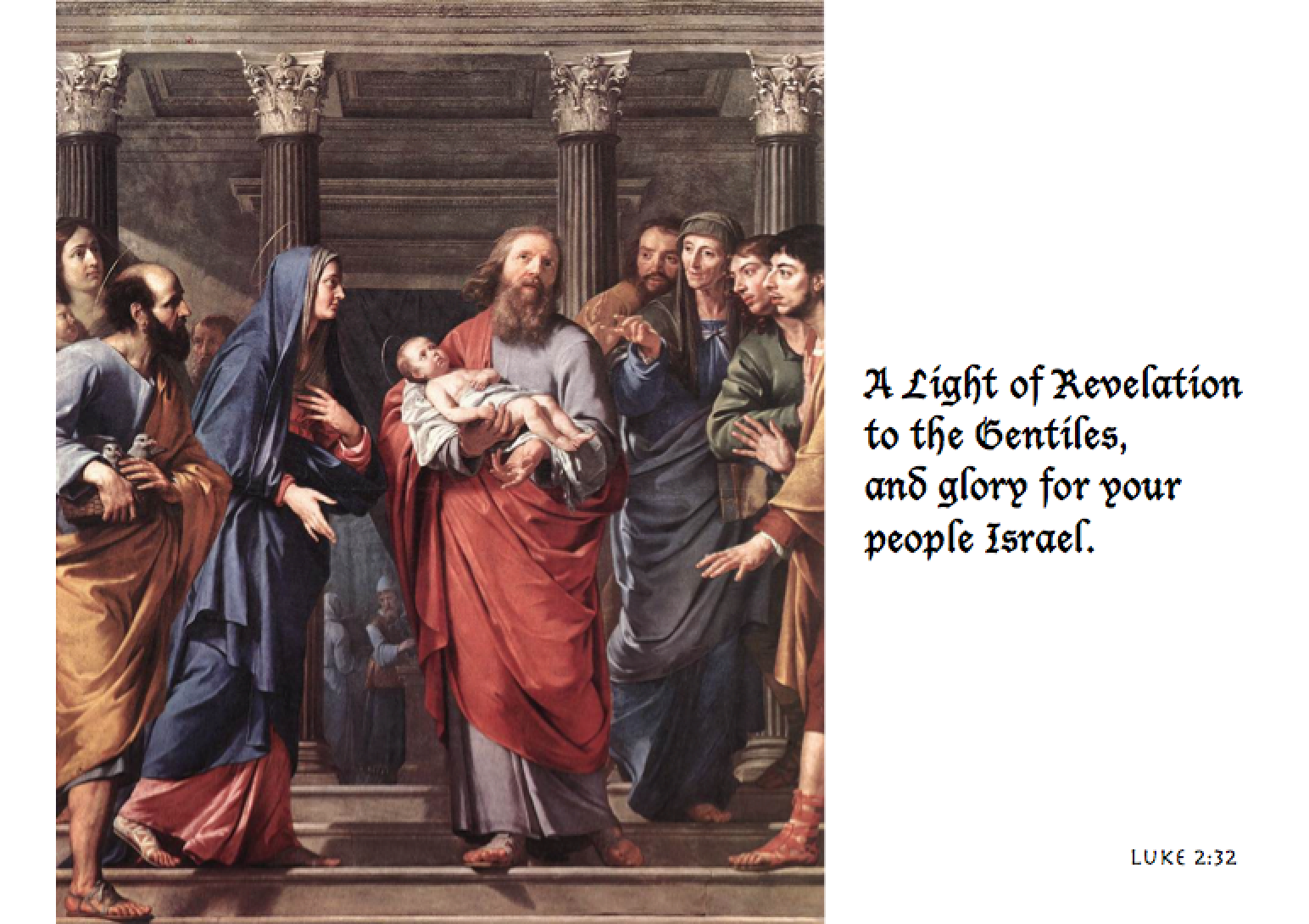 Today’s Feast: The Presentation of the Lord

Now there was a man in Jerusalem whose name was Simeon.
This man was righteous and devout,
awaiting the consolation of Israel,
and the Holy Spirit was upon him.
It had been revealed to him by the Holy Spirit
that he should not see death
before he had seen the Christ of the Lord.
He came in the Spirit into the temple;
and when the parents brought in the child Jesus
to perform the custom of the law in regard to him,
he took him into his arms and blessed God, saying:

“Now, Master, you may let your servant go
in peace, according to your word,
for my eyes have seen your salvation,
which you prepared in the sight of all the peoples:
a light for revelation to the Gentiles,
and glory for your people Israel.”

The child’s father and mother were amazed at what was said about him;
and Simeon blessed them and said to Mary his mother,
“Behold, this child is destined
for the fall and rise of many in Israel,
and to be a sign that will be contradicted
—and you yourself a sword will pierce—
so that the thoughts of many hearts may be revealed.”
There was also a prophetess, Anna,
the daughter of Phanuel, of the tribe of Asher.
She was advanced in years,
having lived seven years with her husband after her marriage,
and then as a widow until she was eighty-four.
She never left the temple,
but worshiped night and day with fasting and prayer.
And coming forward at that very time,
she gave thanks to God and spoke about the child
to all who were awaiting the redemption of Jerusalem.

When they had fulfilled all the prescriptions
of the law of the Lord,
they returned to Galilee, to their own town of Nazareth.
The child grew and became strong, filled with wisdom;
and the favor of God was upon him.

“Today the Church celebrates the feast of the Presentation of the Lord which occurs forty days after the birth of Jesus and is also known as Candlemas day, since the blessing and procession of candles is included in today’s liturgy. The feast was first observed in the Eastern Church as ‘The Encounter’. In the sixth century, it began to be observed in the West: in Rome with a more penitential character and in Gaul (France) with solemn blessings and processions of candles, popularly known as ‘Candlemas’. The Presentation of the Lord concludes the celebration of the Nativity and with the offerings of the Virgin Mother and the prophecy of Simeon, the events now point toward Easter.

Today’s first reading gives us an important insight to understand profoundly the mystery of the Lord’s Presentation in the Temple by Mary and Joseph, in accordance with the canons of Mosaic Law. The text, taken from the Prophet Malachi says, ‘I am sending my messenger to prepare the way before me; and suddenly there will come to the temple the Lord who you seek’ (Mal 3:1). From all the Gospels, we know that it is the Precursor, St John the Baptist who was born 6 months before Jesus, that God sent to prepare His way. Putting these evangelical facts together, we can comprehend the words of the Prophet Malachi. So, soon after the Baptist’s birth, God entered His temple. Jesus’ presentation signifies God’s entrance to His temple.”[1] God made man entered His temple, presenting Himself as light to those who were really searching for Him.

God enlightens all who search for Him sincerely. As in the case of the old man Simeon whose “eyes have seen the salvation which (God) you have prepared for all the nations to see”. Indeed there are different categories of people who are enlightened at the temple. There is Joseph and Mary who represent the laity and especially families; there is Simeon who represents the Church and the priesthood; and there is the elderly Anna, the prophetess who represents all the lay consecrated people who take on the evangelical vows of poverty, chastity and obedience living it in community. Anna also represent the elderly in our society who have a very great role to play in the wisdom they have to offer us.

All the vocations I listed above get their direction and purpose from Christ Himself, and without His coming into the world, the world has no reference point, no destiny, no journey to make. People live for themselves and get what they can in life with the occasional act of charity just to make life meaningful. But the deeper questions of life like – why do I fear death? Why am I sad? Why am I lonely? Why do I have this ceaseless restlessness inside of me that I can only seem to get rid of temporarily?

The importance of this Feast is highlighted in the second reading which states, “Since all the children share the same blood and flesh, Christ too shared equally in it, so that by his death he could take away all the power of the devil, who had power over death, and set free all those who had been held in slavery all their lives by the fear of death.” Jesus as divine Light of God, the Son of the Father, dispels the lie of the Devil that was embedded in human flesh from the time of Adam and Eve our first parents when they believed the lies of the Devil. Jesus does so by entering the temple for the rite of purification by the Jews but He is the fulfilment of all the Jewish hopes. He fulfilled the Jewish Law and ushered in the new period of grace under which a light shines in the darkness and the darkness can never overcome it! The good news for all those who suffer under the fear of death is that they do not have to succumb to sin anymore because Jesus “himself been through temptation he is able to help others who are tempted.” The Lord freely offers His Spirit to us at baptism and this is why at the celebration of baptism, we are given a lighted candle from the Paschal Candle as a reminder that we are not alone anymore in this life or the next! We have a light inside of us that we are to fan into a flame, the light of faith for all to see.

Is your light strong or dim? Can it withstand the blasts of the Devil? Do we gather in community in order to share the light of the Word of God so that we are supported and edified? What shall I do with my light today – do I decide to put it on a lampstand or hide it under my bed?