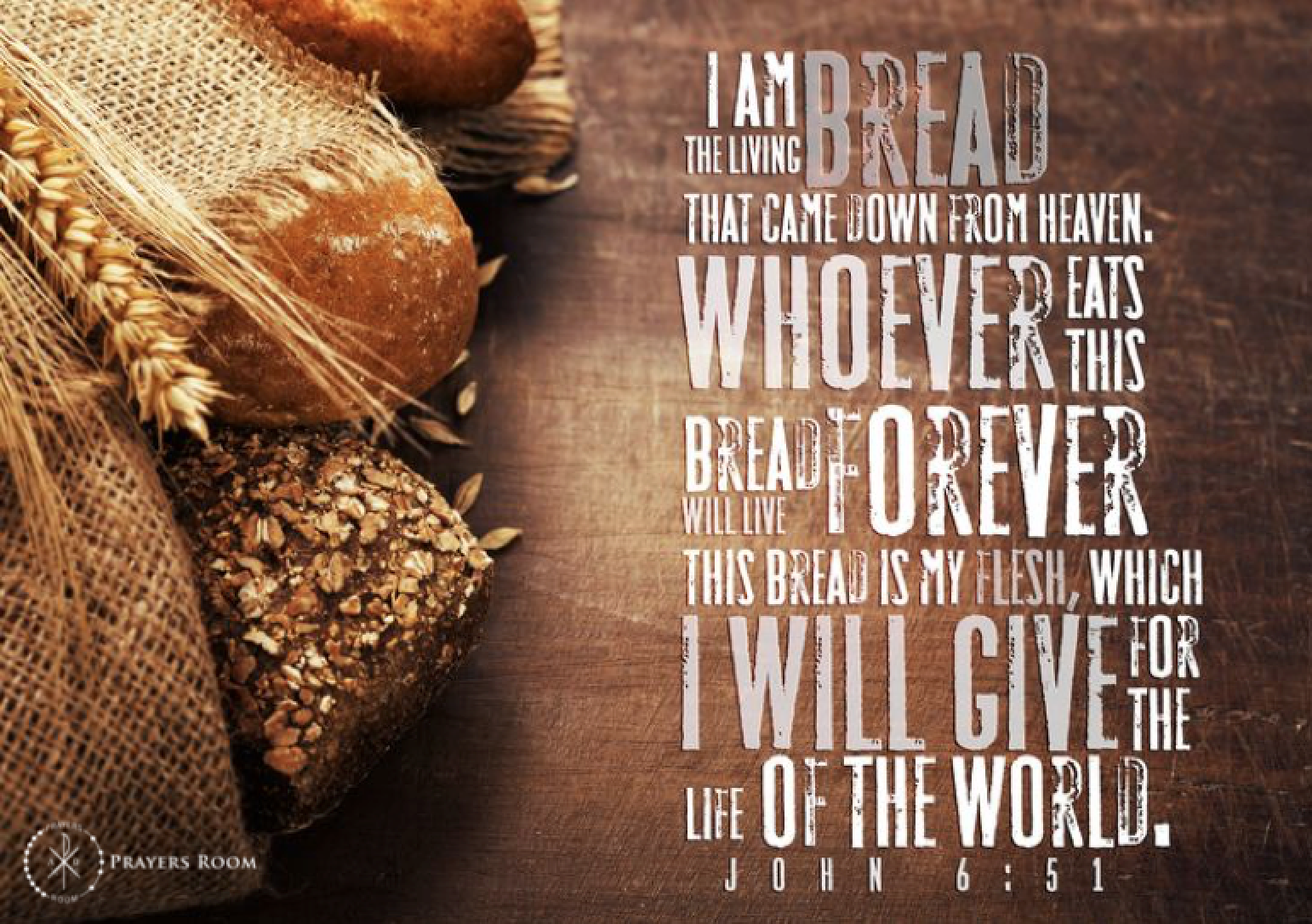 Today’s Note: The Solemnity of the Most Holy Body and Blood of Christ

On the first day of the Feast of Unleavened Bread,
when they sacrificed the Passover lamb,
Jesus’ disciples said to him,
“Where do you want us to go
and prepare for you to eat the Passover?”
He sent two of his disciples and said to them,
“Go into the city and a man will meet you,
carrying a jar of water.
Follow him.
Wherever he enters, say to the master of the house,
‘The Teacher says, “Where is my guest room
where I may eat the Passover with my disciples?”‘
Then he will show you a large upper room furnished and ready.
Make the preparations for us there.”
The disciples then went off, entered the city,
and found it just as he had told them;
and they prepared the Passover.
While they were eating,
he took bread, said the blessing,
broke it, gave it to them, and said,
“Take it; this is my body.”
Then he took a cup, gave thanks, and gave it to them,
and they all drank from it.
He said to them,
“This is my blood of the covenant,
which will be shed for many.
Amen, I say to you,
I shall not drink again the fruit of the vine
until the day when I drink it new in the kingdom of God.”
Then, after singing a hymn,
they went out to the Mount of Olives.

Why did Jesus offer himself as “food and drink” to his disciples? Jesus chose the time of Passover to fulfill what he had announced earlier at Capernaum – giving his disciples his body and his blood (John 6:51-58). Jesus’ passing over to his Father by his death and resurrection, the new Passover, is anticipated in the Last Supper and celebrated in the Eucharist or Lord’s Supper, which fulfills the Jewish Passover and anticipates the final Passover of the church in the glory of God’s kingdom.

This is the most significant meal of Jesus and the most important occasion of his breaking of bread. In this meal Jesus identifies the bread as his body and the cup as his blood. When the Lord Jesus commands his disciples to eat his flesh and drink his blood, he invites us to take his life into the very center of our being (John 6:53). That life which he offers is the very life of God himself. Jesus’ death on the cross, his gift of his body and blood in the Supper, and his promise to dine again with his disciples when the kingdom of God comes in all its fulness are inseparably linked.

Jesus instructed his disciples to “do this in remembrance of me”. These words establish every Lord’s Supper or Eucharist as a “remembrance” of Jesus’ atoning death, his resurrection, and his promise to return again. “For as often as you eat this bread and drink the cup, you proclaim the Lord’s death until he comes” (1 Corinthians 11:26). Our celebration of the Lord’s Supper anticipates the final day when the Lord Jesus will feast anew with his disciples in the heavenly marriage feast of the Lamb and his Bride. Do you know the joy of the drinking Christ’s cup and tasting the bread of his Table in sincerity?

Mark ties the last supper meal with Jesus’ death and the coming of God’s kingdom. Jesus transforms the Passover of the Old Covenant into the meal of the “new covenant in my blood”.

In the Old Covenant bread and wine were offered in a thanksgiving sacrifice as a sign of grateful acknowledgment to the Creator as the giver and sustainer of life. Melchizedek, who was both a priest and king (Genesis 14:18; Hebrews 7:1-4), offered a sacrifice of bread and wine. His offering prefigured the offering made by Jesus, our high priest and king (Hebrews 7:26; 9:11; 10:12). The remembrance of the manna in the wilderness recalled to the people of Israel that they live – not by earthly bread alone – but by the bread of the Word of God (Deuteronomy 8:3).

The unleavened bread at Passover and the miraculous manna in the desert are the pledge of God’s faithfulness to his promises. The “cup of blessing” at the end of the Jewish passover meal points to the messianic expectation of the rebuilding of Jerusalem. Jesus gave a new and definitive meaning to the blessing of the bread and the cup when he instituted the “Lord’s Supper” or “Eucharist”. He speaks of the presence of his body and blood in this new meal. When at the Last Supper Jesus described his blood “poured out for many for the forgiveness of sins” (Matthew 26:28), he was explaining his coming crucifixion as a sacrifice for sins. His death on the cross fulfilled the sacrifice of the paschal lamb. That is why John the Baptist called him the “Lamb of God who takes away the sins of the world.” Jesus made himself an offering and sacrifice, a gift that was truly pleasing to the Father. He “offered himself without blemish to God” (Hebrews 9:14) and “gave himself as a sacrifice to God” (Ephesians 5:2). This meal was a memorial of his death and resurrection.

When we receive from the Lord’s table we unite ourselves to Jesus Christ, who makes us sharers in his body and blood. Ignatius of Antioch (35-107 A.D.) calls it the “one bread that provides the medicine of immortality, the antidote for death, and the food that makes us live for ever in Jesus Christ” (Ad Eph. 20,2). This supernatural food is healing for both body and soul and strength for our journey heavenward. When you approach the Table of the Lord, what do you expect to receive? Healing, pardon, comfort, and rest for your soul? The Lord has much more for us, more than we can ask or imagine. The principal fruit of receiving the Eucharist is an intimate union with Christ. As bodily nourishment restores lost strength, so the Eucharist strengthens us in charity and enables us to break with disordered attachments to creatures and to be more firmly rooted in the love of Christ. Do you hunger for the “bread of life”?

Lord Jesus, you nourish and sustain us with your very own presence and life. You are the “Bread of Life” and the “Cup of Salvation”. May I always hunger for you and be satisfied in you alone.