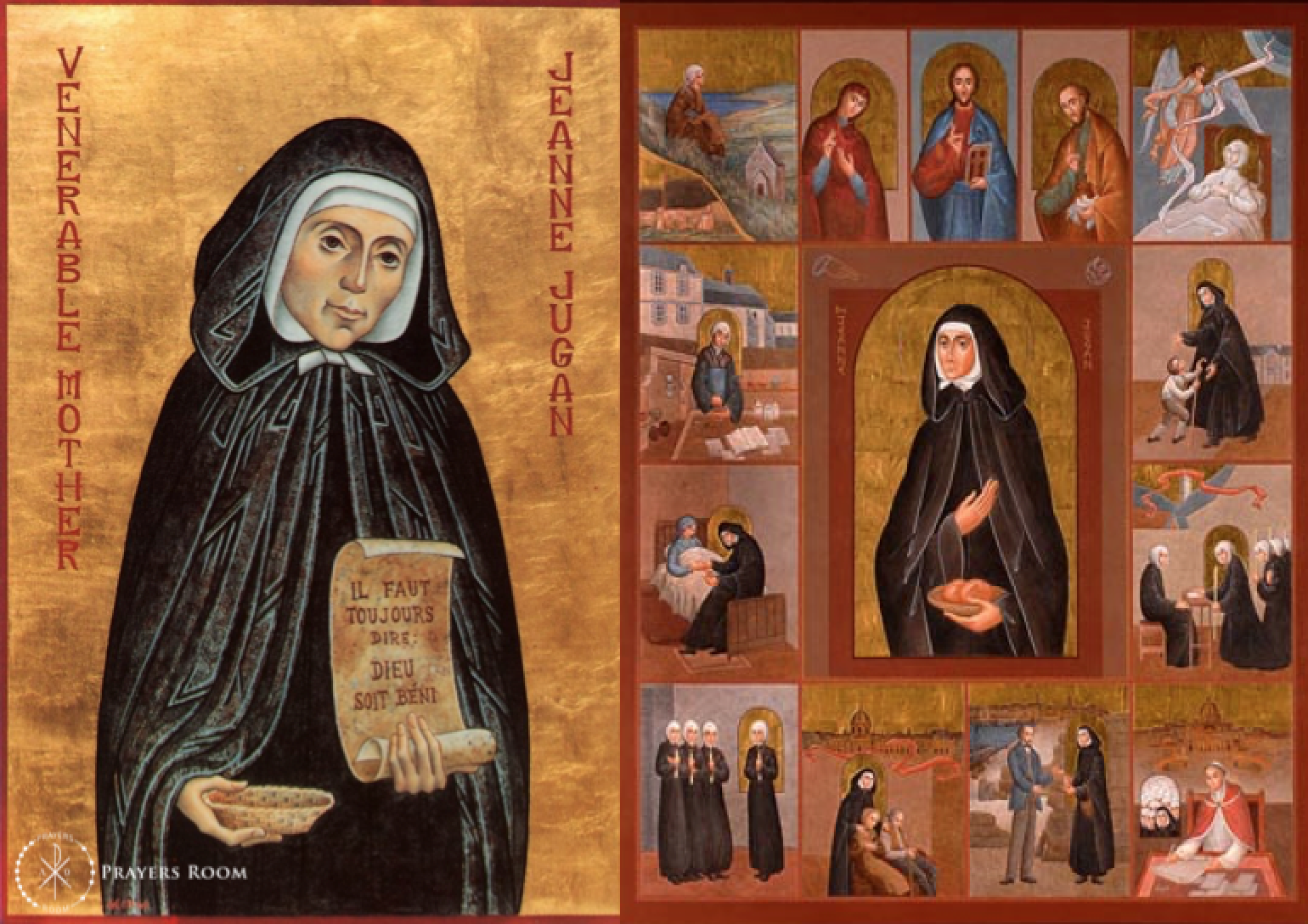 Quote:
“Love God very much, so that you can look after the aged well, for it is Jesus whom you care for in them.”

“My little ones, never forget that the poor are Our Lord; in caring for the poor say to yourself: This is for my Jesus – what a great grace!”

“Be kind, especially with the infirm. Love them well … Oh yes! Be kind. It is a great grace God is giving you. In serving the aged, it is he himself whom you are serving.”

To begin with very little:
A troubled period in France in 1792.

Her family is reduced to want the following the disappearance of the father at sea. As a young girl, she is placed ‘in domestic service’. When she is past forty, she is still serving in other people’s homes.

One day, everything is changed. Unable to resist the vision of an old woman about to die alone, in a hovel, she carried the sightless invalid to her own bed. The two lines of Jeanne’s vocation – the human and the divine – join together to become one. It is something completed, as also something beginning. The hand is put to the plough. The limits of her little room have just exploded, together with those of her heart. They have been thrown open to embrace the whole world. And so, from the night when the aged Anne sleeps in her bed, Jeanne belongs to her Lord and to the elderly of the human family.

The desire for the religious life, dwelling within her these past twenty years, becomes a reality. At last!

She who has always obeyed, now directs, organises, and founds Homes for the aged poor. But, yet a little while … another task awaits her, a greater one: to suffer, to be silent, to be set aside, to be forgotten, and once again to obey.

For twenty-seven years, Jeanne Jugan is simply a Little Sister doing her work in silence and self-effacement. Through her contacts with the novices among whom she lives, she engraves the imprint of her soul on the religious family she has founded.

Only a few years of activity, few words, no writings … a great work, a masterpiece for God. Jeanne Jugan died at the Mother House of the Congregation on August 29, 1879.

Certain sayings of Jeanne Jugan have been banded down to us, just as they came from her lips:

“God wants me for himself, he is keeping me for a work which is not yet founded.”

“Do not call me Jeanne Jugan. All that is left of her is Sister Mary of the Cross, unworthy though she is of that lovely name.”

“What happiness for us, to be a Little Sister of the Poor!”

“It is a great grace that God has given you in calling you to serve the poor.”

“If God is with us, it will be accomplished.”

“Remain little, hidden by humility in all God wants from you, as being only the instruments of his work.”

“It is so good to be poor, to have nothing, to depend on God for everything.”

“Jesus is waiting for you in the chapel. Go and find him when your strength and patience are giving out, when you feel lonely and helpless. Say to him: ‘You know well what is happening, my dear Jesus. I have only you. Come to my aid …’ And then go your way. And don’t worry about knowing how you are going to manage. It is enough to have told our good Lord. He has an excellent memory.”

“Refuse God nothing. Accustom yourselves to do everything for him … Let us love him very much, that is all that is necessary.”