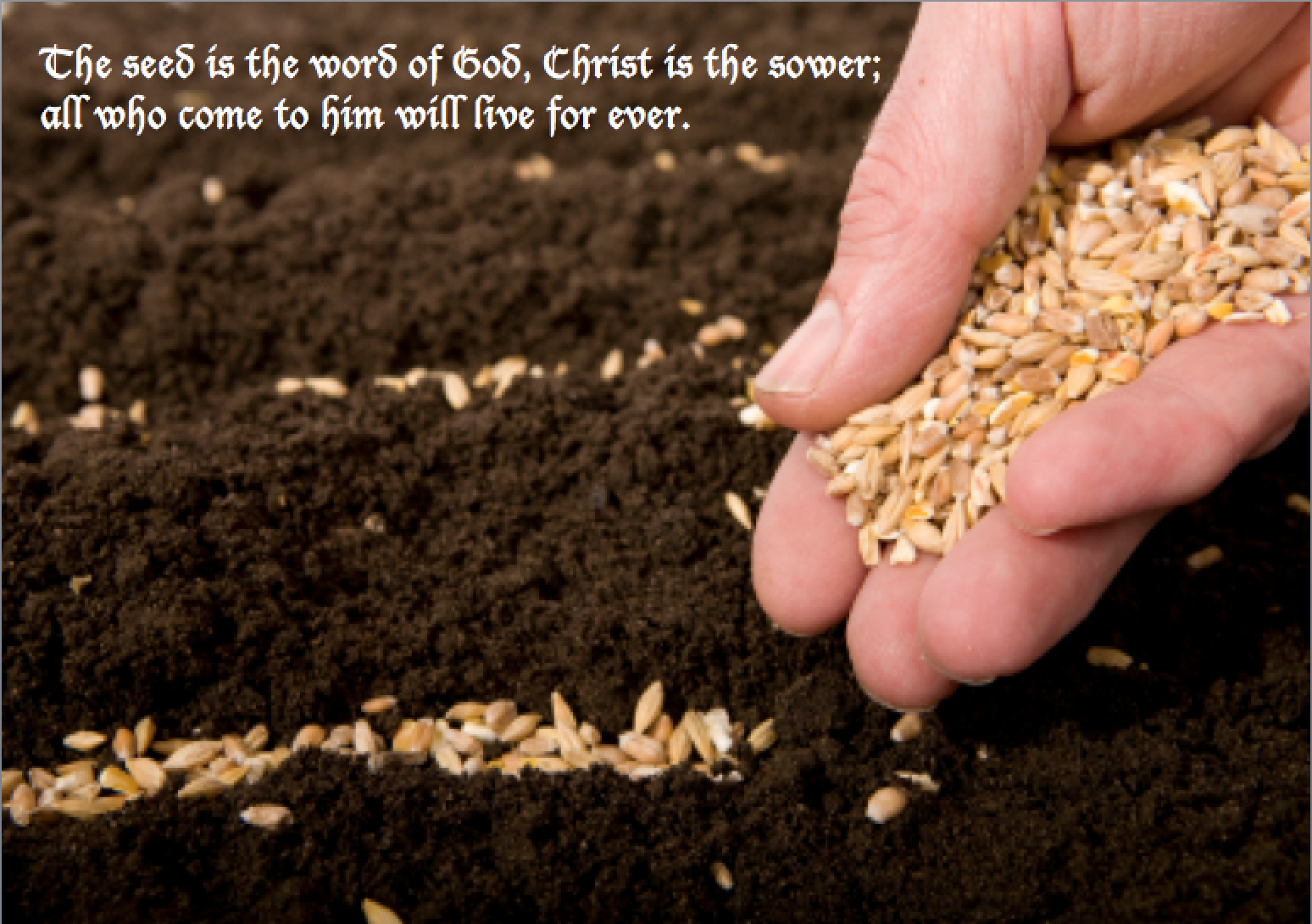 On that day, Jesus went out of the house and sat down by the sea.
Such large crowds gathered around him
that he got into a boat and sat down,
and the whole crowd stood along the shore.
And he spoke to them at length in parables, saying:
“A sower went out to sow.
And as he sowed, some seed fell on the path,
and birds came and ate it up.
Some fell on rocky ground, where it had little soil.
It sprang up at once because the soil was not deep,
and when the sun rose it was scorched,
and it withered for lack of roots.
Some seed fell among thorns, and the thorns grew up and choked it.
But some seed fell on rich soil, and produced fruit,
a hundred or sixty or thirtyfold.
Whoever has ears ought to hear.”

The disciples approached him and said,
“Why do you speak to them in parables?”
He said to them in reply,
“Because knowledge of the mysteries of the kingdom of heaven
has been granted to you, but to them it has not been granted.
To anyone who has, more will be given and he will grow rich;
from anyone who has not, even what he has will be taken away.
This is why I speak to them in parables, because
they look but do not see and hear but do not listen or understand.
Isaiah’s prophecy is fulfilled in them, which says:
You shall indeed hear but not understand,
you shall indeed look but never see.
Gross is the heart of this people,
they will hardly hear with their ears,
they have closed their eyes,
lest they see with their eyes
and hear with their ears
and understand with their hearts and be converted,
and I heal them.

In today’s Gospel, Jesus uses the image of seed sown on different kinds of soil to teach his listeners about the fruitfulness of God’s word (Matthew 13:1-23). Every seed has the same potential for growth; it is the type of soil that determines how abundant the yield will be. The prophet Isaiah seems to say the same thing: God’s word, like the seed, always remains fruitful—it will not return void. So it seems that our human response determines the harvest.

Perhaps this explains why some people seem to bear more spiritual fruit than others. The Old Testament story of King Saul and King David offers us a dramatic illustration of this principle (1 Samuel 9–2 Samuel 12).

Saul was chosen by God to rule over Israel, but because of his fear and selfishness, he disobeyed the Lord. He didn’t make a good return to God or bear lasting fruit. As a result, God chose someone else—a man after his own heart—to replace Saul: the shepherd David.

Now, David did what God asked him to do. He fought Israel’s enemies, he rescued the ark of the covenant from the Philistines, and he even danced joyfully before the Lord for all to see.

Of course, we all know that David was far from perfect. He committed adultery and let himself get caught up in a web of deception and murder. But he also repented (Psalm 51). Despite his serious failings, David’s humility allowed God to continue to use him. It wasn’t because he was perfect that David could bear fruit for the Lord; it was because he loved God and tried to follow him with his whole heart.

“Have mercy on me, God, in your goodness. Help your word to bear fruit in my life today.”